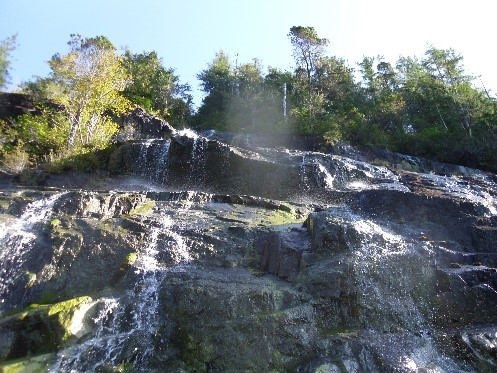 A large and successful shellfish and fish industry resides in the northeastern Pacific, so when a heat anomaly now known as the “Blob” was discovered in the area there was concern about its impacts. Since many harmful algal blooms (HABs) thrive in higher temperatures, it was important to determine if the “Blob” caused more favorable environmental conditions to support increased amounts of algae in the water. Measurements were taken in 2019 for essential nutrients such as nitrates, phosphates, and silicates, as well as water properties including temperature, salinity, density, dissolved oxygen, transmissivity, and fluorescence. These were then compared to data from 2014 to verify if there was a difference between two years that the “Blob” was confirmed to have appeared. This analysis focused on a transect from Warn Bay to Tranquil Inlet in Clayoquot Sound, British Columbia, Canada. In 2019, the comparison showed a decrease in nutrients at the water’s surface despite consistent values at the sea floor, as well as an increase in temperature that correlated with a decrease in transmissivity and an increase in fluorescence near the surface. This evidence supported the possibility of increased favorable conditions for HABs with the “Blob” since 2014. If persistent, future years would have to face increased risk of these HABs contaminating seafood supplies.